Climate Warriors: We can’t negotiate with people wrecking the planet for profit

by Brian Gordon
in Articles, Climate and Social Justice, Sociopaths in Personal Life

Dear Climate Campaigners: You – we – need to get serious about saving the planet. Any day now would be great. I know we’ve been at it for 40-some years, and this would be a great year to finally get it right and break through.

Climate Warriors: If we want real action on climate change, we need to know our enemy. He is not like us. He does not play fair, he plays only and always to win.

You do not confront such an enemy with candlelight vigils and protests. 350.org, I’m looking at you. If we’re serious about climate change, and we need to be, vigils are not sending that message. Vigils and rallies are not working; they are being ignored.

Climate warriors, I tell you this: You do not bargain with people willing to risk their own children. You do not trust people wrecking the very planet we all depend upon for life. Such people are dangerous fools and must be stopped. We can psychoanalyse them later.

Such reckless and greedy people will give us the respect we demand, and no more. Charge the CEOs of the oil companies with crimes against humanity Make an example of them that may scare the rest enough to get out of the way.

How do these people sleep at night after funding climate denial campaigns? Like a rich baby swaddled in the finest clothes in the warmest, safest nursery in all the world. They simply do not care about anything but themselves – they are incapable of it.

We know that that climate change will displace hundreds of millions, destroy our civilization, and quite possibly will ultimately kill billions. Yet even when we explain to deniers this risk, they stick to their scientific prostitutes and paid shills.

Climate deniers are people who reject science and the precautionary principle. You’re not going to be able to reason with them. They don’t believe in reason. Many of them believe that winning is the only thing; as I said earlier, they are predators. They have a different morality. Perhaps some day there will be time to psychoanalyse these people, but right now we need to get moving.

Unfortunately, deniers and delayers – another form of denial – are everywhere in positions of power and they are deceiving us. They may say they ‘get’ the urgency and danger of the climate crisis, but then their actions show they believe the opposite – there is no danger, there is plenty of time.

Canada’s Justin Trudeau is a prime example: Made a huge to-do about signing the Paris Agreement – he flew 250 Canadian delegates to Paris and they pushed for limiting warming to 1.5C. Sounds great – he and his Liberal Party get it and are taking serious action!

They came back home and bought a pipeline.

And the rot goes much further back. Years before, Jean Chretien was Canada’s Prime Minister and leader of the Liberal Party. He and his crew jetted off to Kyoto and signed that climate agreement. They came back and increased funding to the oil sands and did essentially nothing about reducing climate change.

In between lying Liberals, Canada has had Conservative leaders. Anyone paying attention knows that conservatives worldwide are in denial about climate change, so overall that means Canada’s greenhouse gas emissions have done this: 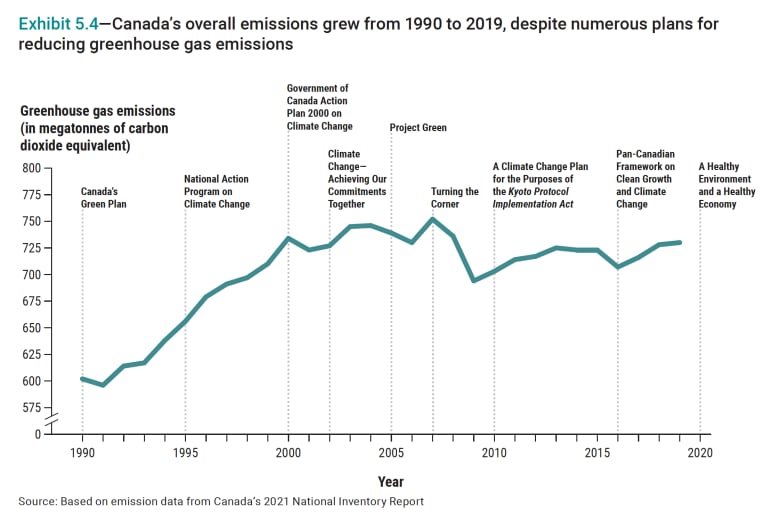 Liberal, Tory, Same old story as we say in Canada. They talk differently, but when it comes to climate and corporations, there’s no real difference.

Voting is clearly no longer enough. Politicians have become hopelessly corrupted and the system itself sustains that. Most climate-delaying ‘democracies’ like Canada, the USA, and Brazil have First Past the Post electoral systems, which essentially means a two-party system. Two-party systems are notoriously easy to corrupt and that has clearly happened in these countries.

And so this brings us back to the main points:

We are out of time. We can’t keep hoping that we can vote decent human beings into high office – that is clearly not working. Filling the streets with protest is no longer having an effect, either. Gluing ourselves to banks and airplanes results in jail time for the protestor.

We either band together in solidarity: everyone concerned about the climate emergency, or social justice, or affordable housing, or the opioid crisis, or corporate dominance, or electoral reform, or – especially – the rights of Indigenous people. It and we are all joined, whether we know it or want it or not. We either start acting like it, or the predators of the world will destroy it and us.

Stop negotiating with terrorists and sociopaths, which is what these people are. Force them to do the right thing, or force them out of power. It’s us or them.